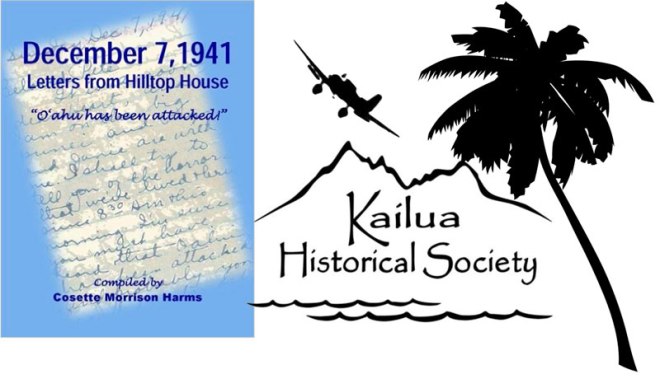 at the Kailua Public Library

for a staged reading of excerpts from “December 7, 1941: Letters from Hilltop House” by Cosette Morrison Harms.

Through a series of letters to her son on the mainland, the author’s grandmother, Anne Powlison, describes witnessing both the bombing of Kaneohe Naval Air Station (concurrent with the bombing of Pearl Harbor) from the family home overlooking Lanikai and the frenetic weeks which followed. As the family and the territory itself copes with the ensuing confusion of blackouts, paranoia and an expected imminent invasion, Mrs. Powlison finds herself cut off from reliable communication with the mainland and her son at university in Washington state. Her steady stream of letters help to bolster not only her own courage, but those of her son’s as well, and bear testament both to life on Oahu during wartime, as well as the enduring resilience of the human spirit.

Performers from KOA Theater will perform a selection of these letters, interwoven with historical interviews and news reports, to bring to life the dark days of uncertainty that followed the attack on Pearl Harbor and the fortitude of Hawaii’s citizens in the face of the unknown.

KAILUA’S GATEWAY:
A WALKING TOUR WHERE WATER ONCE FLOWED 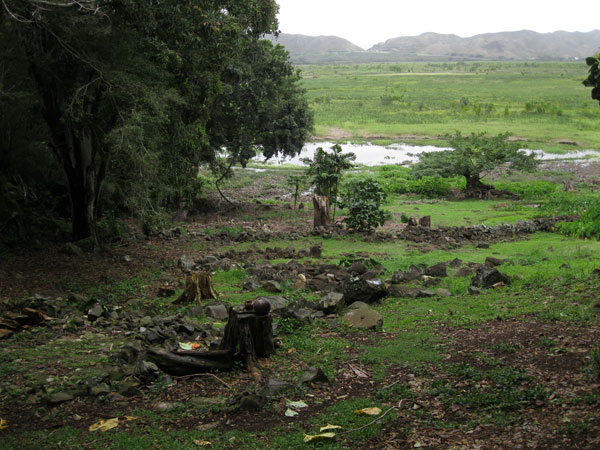 This photo of Kawainui is taken from Ulupo Heiau’s vantage point, adjacent to where we will be walking.

Within a stone’s throw of Kawainui’s levee lies an acreage virtually unknown and out of sight. Had the homeless encamped there remained invisible, this historically significant area would not have become a public opportunity for further education. But the opportunity is now very real, thanks to the recent clearing efforts done by the State’s DLNR.

Driving into Kailua along “Church Row” over the past month, one could not have but noticed the hau thicket being pulled back and the narrow embankment exposed. It may have seemed an insignificant acreage before, but, in fact, the opposite is true. A century ago, for example, a large pump ran non-stop sending millions of gallons of precious water to the thirsty sugar cane fields in Waimanalo. Centuries before it may well be that the Marsh’s water, in that same location, was flowing through fish ponds with gated chambers, as the water flowed into Kaelepulu Stream.

Clearing the hau has revealed many hidden remains of human habitation, including hale remnants photographed soon after its discovery in 2013.  The ring of stones you can see at the right was part of the foundation of a simple 3-room hale.

Unlike most areas lying on the southern bank of Kawainui, this parcel has relatively been spared the massive soil disturbance of heavy earth-moving equipment. So come to see with your own eyes the three types of human impact still preserved: the Hawaiian culture, the Japanese immigrants, and the homeless.

Because the terrain is uneven and the walkways not well formed, good walking shoes are required. Mosquito repellent is recommended. Parking is provided by St. John’s Lutheran Church. The tour will begin Sunday, November 13, 2:30 p.m.  in the parking lot and will end approximately an hour and a half later.

Blackouts, Bullets and Barbed Wire: A Town Overtaken
Faith Baptist Church, 3-5 p.m., free. Kailua Historical Society reminisces on the Dec. 7, 1941, bombings of Bellows and Mokapu and their effects on the area from the Kailua perspective.
Please see the flyer for more details:
KHS December Flyer

Articles from the Blog